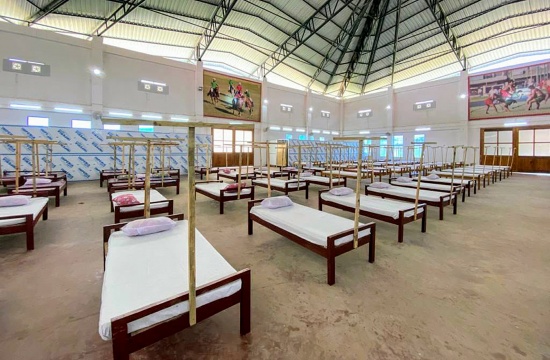 With a surge in positive cases of Covid-19, a proper decision will be taken in the upcoming Cabinet meeting whether to strengthen the present lockdown and its extension, he added.Singh maintained that awareness among the people is very much needed to contain further spread of the disease. He also appealed to the people to come out openly for early treatment instead of concealing their COVID-19 status if tested positive.

"Presently, a total of 300 beds have been installed in the CCC, Lamboikhongnangkhong and it will be upgraded to a 1000-bedded Centre as it has enough space for extension. He appreciated the Health Department and other officials for setting up the COVID Care Centre so that infected people can get timely treatment," said Singh.

Meanwhile, strict lockdown is being imposed in the state by the State Government administration, keeping in view the high number of transmission of COVID-19 infection which was reported.

All the roads look deserted and business establishment remained totally stopped. Following it, civil organisations have volunteered to keep vigil while police personnel are being deployed at strategic locations to monitor the movement in the several parts of the state.

Police personnel are patrolling round the clock in the state and constant reminders are being announced through the PA system. State Police is also keeping a strict vigil on the movement of vehicles and people so as to make the lockdown more effective and successful.

From 1260 positive cases on July 1 to 2831 such cases on August 2 and clearly the rate of infection has been steeply climbing, especially when viewed against the fact that on April 14, Manipur had just two cases.

Within a span of one month, Manipur saw the addition of 1571 positive cases and cap this off with the fact that the State has already registered 7 deaths, all coming within a few days time from July 29, when the State recorded its first death, to August 2 the spread is disturbing.

While the State Health Department has ruled out community spread as of now, it has not stopped from stating that the next stage would be community transmission. Local transmission is real, very real now and the Government have started to think beyond the lockdown and see what other steps should be taken up to contain the situation.