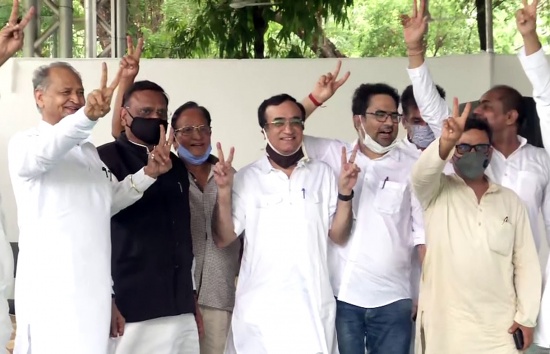 Jaipur, July 13 : A day after Deputy Chief Minister Sachin Pilot claimed that the Ashok Gehlot government in Rajasthan has turned into a minority government after some MLAs went with him, Chief Minister Gehlot on Monday showed a united force at the Legislature Party meeting throwing the show open to media claiming around 100 MLAs were still by his side.

As Gehlot managed to put up a brave face and paraded all MLAs in front of the media, the Pilot camp remained out of sight.

Congress leader Randeep Surjewala clearly told the media that there was "No scope for personal ambition in the Congress party". However, he added that the oldest party has its doors open for Pilot and his MLAs. "If anyone gets annoyed in the family, the family head tries to resolve the issue. So am I here on behalf of our leader Sonia Gandhi to ensure our party is united".

The Congress MLAs gathered at the Chief Minister's Residence here "exuded confidence" that their government is in safe hands. There was sloganeering and Victory signs flashed at the media.

Gehlot along with other ministers even shouted in unison "We stand together".

Congress officials told IANS that Pilot's calculations seem to be going wrong and he has hurriedly issued a statement claiming that he has support of 30 MLAs which is not the real case. It seems he has 15 MLAs that means he is short of numbers.

He was not ready to wait for months and hence he tried to destabilise the govt, said Congress members at the CMR.

BJP state president Satish Poonia meanwhile said that the party shall follow central leadership directions and will wait for their orders looking at the evolving political situation in the state.