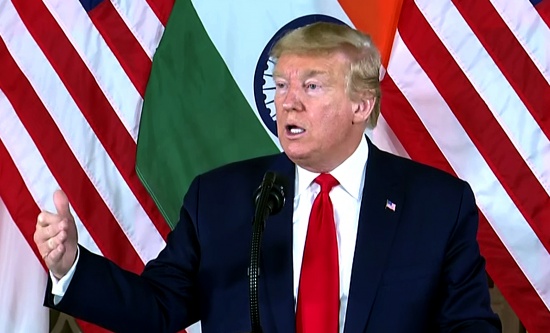 Washington, July 1 : US President Donald Trump has approved a plan presented by the Pentagon to withdraw 9,500 American soldiers from Germany as he had ordered, the Department of Defense said.

"The proposal that was approved not only meets the President's directive, it will also enhance Russian deterrence, strengthen NATO, reassure Allies, improve US strategic flexibility and U.S. European Command's operational flexibility, and take care of our service members and their families," a Department statement said on Tuesday.

Pentagon chief Mark Esper and chairman of the joint chiefs of staff General Mark Milley presented the plan to Trump on Monday and in the "coming weeks" they will report to Congress and consult with North Atlantic Treaty Organization (NATO) allies, reports Efe news.

In the statement, the Pentagon did not offer details on withdrawal dates or where the troops will go, although it said that the affected personnel and their families will receive information "as planning progresses".

Trump said last week that he will "probably" move some troops to Poland, after Polish President Andrzej Duda asked him not to remove US soldiers from Europe.

"Poland is one of the few countries that are fulfilling their obligations under NATO, in particular their monetary obligations. And they asked us if we would send some additional troops. They're going to pay for that," Trump said during a press conference with Duda at the White House.

"They'll be paying for the sending of additional troops, and we'll probably be moving them from Germany to Poland. We're going to be reducing Germany very substantially," he added.

Trump initially announced the withdrawal of troops last month with the aim of pressuring Germany to increase its contribution to NATO.

The US currently has some 52,000 troops deployed at German bases, of which about 34,500 are active soldiers and the rest are civilian defense department employees.

Germany has the most US troops in Europe, followed by Italy, the UK and Spain.

US military personnel have been in German territory since the end of World War II and during the Cold War, they were considered as a containment force against the Soviet Union.