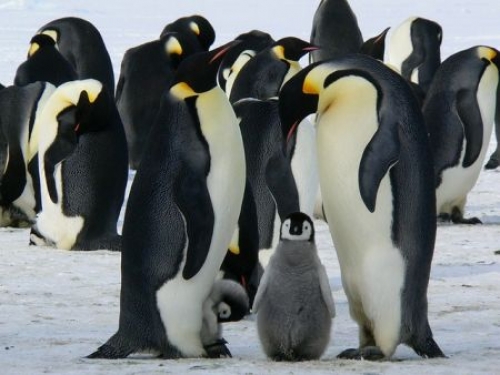 Based on direct ground counts and computer-automated counts of aerial images from drones, the researchers found a total of 751,527 pairs of Adelie penguins on the Danger Islands in the Weddell Sea on the east side of the Antarctic Peninsula, reports Xinhua news agendy.

The amount of Adelie penguins discovered here is more than the rest of the Antarctic Peninsula region combined, noted the researchers in a study published on Friday in the journal Scientific Reports.

Moreover, it represents the first complete census of Adelie penguins in the Danger Islands, they added.

"Until recently, the Danger Islands weren't known to be an important penguin habitat," said Heather Lynch, an ecologist from Stony Brook University who led the study, in a press release.

These super colonies have gone undetected for decades, Lynch noted, partly because of the remoteness of the islands themselves and partly the treacherous waters that surround them.

The Danger Islands appear to have avoided recent declines in penguin population documented on other parts of the Antarctic Peninsula.

Another study published earlier this week suggested that more than 70 per cent of king penguins may disappear by the end of the century as a result of global warming and overfishing.

As the Danger Islands were likely to remain an important hotspot for avian abundance under projected climate change, scientists believe it deserve special consideration in the negotiation and design of Marine Protected Areas in the region.

The idea of building the Marine Protected Areas, which covers 1.8 million sq.km of the Weddell Sea and around the Antarctic Peninsula, was first put forward by the European Union and supported by nongovernmental organization Greenpeace.

In January, a global campaign has been launched in the vast fishing-free zone to better protect wildlife amid worsening climate change.